China to roll out measures to stabilize manufacturing investment

The country will boost green investment by encouraging investment in technological upgrading and stepping up policy support for the traditional manufacturing industry to reduce carbon emissions, said Meng Wei, spokesperson for the National Development and Reform Commission.

The country will also support investment in advanced manufacturing and improving weak links in the industrial and supply chain, Meng added.

Comprehensive measures will be taken to ease the upward pressure on commodity prices and strengthen investment incentives for middle and downstream manufacturing enterprises while implementing various cost reduction policies, the spokesperson said.

China's fixed-asset investment amounted to 30.25 trillion yuan (about 4.67 trillion U.S. dollars), up 10.3 percent year on year in the first seven months of this year, data from the National Bureau of Statistics showed.

Specifically, investment in manufacturing gained 17.3 percent year on year during the period, the data showed.

Putting on a helmet and sitting in front of several big screens, you are able to experience the exciting moment of a spacecraft launch. This is one of the highlights of the 2021 Global Digital Economy Conference that concluded in Beijing Tuesday.

During the two-day event that opened on Monday, cutting-edge technologies featuring data-driven innovation were displayed while participants focused on discussions concerning the digital economy as a new driver of China's economic growth despite the COVID-19 pandemic.

China's digital economy kept a high growth rate of 9.7 percent in 2020 amid the pandemic and global economic downturn, according to a white paper released by the China Academy of Information and Communications Technology (CAICT).

"As people are more connected than ever due to the increasingly diversified communication means, we have all benefited from the progress of digitalization, especially during the hardest time of the pandemic," said Guido Giacconi, vice-president of the European Union Chamber of Commerce in China.

The digital economy has become a key to achieving economic recovery and promoting sustainable development with the global economy, which is still in a fragile state of recovery, said Zhuang Rongwen, director of the Cyberspace Administration of China, at the opening.

The digital economy has displayed strong resilience in the face of the pandemic, as it gives a strong boost to a number of new business models such as online shopping and education, telemedicine and artificial intelligence, said Cai Fang, an expert with the Chinese Academy of Social Sciences.

With its digital economy ranking second in the world, China has highlighted the digital economy development in its 14th Five-Year Plan (2021-2025) to build a digital China.

Chinese companies will also be encouraged to tap opportunities in the overseas digital market in the following decade, said Lei Jun, chairman of Xiaomi Corporation, a Chinese smartphone manufacturer.

According to a guideline jointly released by Chinese government departments on July 23, more efforts will be made to enable domestic digital economy enterprises to accelerate their deployment of overseas research and development centers and product design centers and strengthen cooperation with overseas technology companies in fields such as big data, 5G and artificial intelligence.

The capital city Beijing has also introduced an action plan Monday on accelerating the process of building itself into a worldwide pioneer in digital economic development.

The World Trade Organization predicts that digital technologies will promote an annual growth of the global trade volume by around 2 percentage points by 2030, and the proportion of global service trade will be increased from 21 percent in 2016 to 25 percent by then.

"In face of the challenges such as sluggish economic growth and aging society, the digital economy will enable an inclusive high-quality development that enables more elderly people to overcome the digital divide," said Cai.

Highlights of No. 24-Simplify the Procedures and Set a Time Limit

No. 64 regulates that the APA process consists of the following six phases: (i) pre-filing meeting, (ii) intention for an APA, iii) analyses and evaluation, (iv) formal filing, (v) negotiations and signing, and (vi) monitor and execution (collectively referred as "general procedures"). The simplified procedures contain three phases, namely (i) evaluation of application, (ii) negotiation and signing, and (iii) monitor and execution. The pre-filing meeting and other phases are exempted.

Table: Application Conditions and Rejection Circumstances of the Simplified Procedures for Unilateral APAs 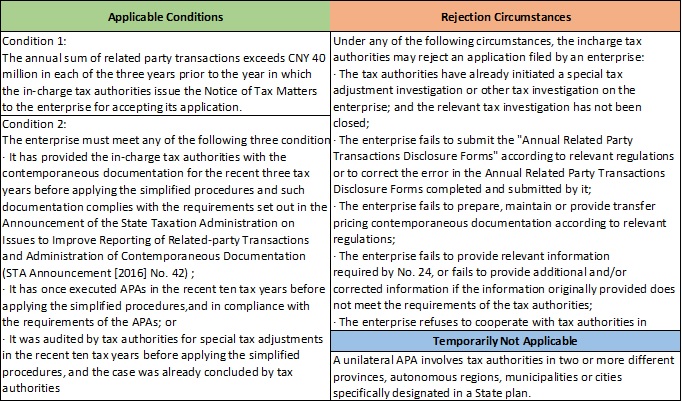 APAs are arrangements reached between enterprises and tax authorities, or between two tax authorities, with respect to the pricing principles and calculation methods for related-party transactions. It is an important tool for enterprises to obtain transfer pricing and tax certainty for cross-border business operations, and it plays an important role in reducing multinational enterprises' transfer pricing compliance costs and in promoting enterprises' cross-border investments and operations. No. 24 announces simplified procedures for unilateral APAs, improving the efficiency of APA negotiation and signing by simplifying the phases of the application and specifying time limits.

Based on our practical experience, we consider that enterprises should focus on the following aspects:

Before, STA shall involve in each case of  Unilateral Advance Pricing Arrangement, which objectively makes the number of arrangements signed can not meet the actual needs of enterprises. With the formally establishment of the Simple Procedures for Unilateral Advance Pricing Arrangement, STA delegates the executive power to competent tax authorities of enterprises, which can improve the ability to process applications. Thus, it can help enterprises effectively avoid or eliminate double taxation and achieve CIT certainty in transfer pricing arrangements.

We recommend that taxpayers with cross-border related-party transactions should actively understand the simplified procedures for unilateral APAs, one of the most critical measures of improving the business environment in the field of taxation, and should communicate and discuss internally. Enterprises may leverage this new policy to gain tax certainty in a more time-efficient and cost-effective way.

Notice on Further Improving the Simplified Deregistration to Facilitate the Market Exit of Micro, Small and Medium-sized Enterprises

The State Administration for Market Regulation and the State Taxation Administration issued a joint circular on August 3, 2021 to clarify matters related to simplified deregistration of enterprises, so that small, medium-sized and micro firms can exit the market more easily.

According to the circular, the scope of simplified deregistration will be expanded to companies that have no creditor's rights or debts such as outstanding expenses for settlement, employee wages, social insurance premiums, statutory compensation, taxes (late fees or fines) payable, etc. All the investors shall make a written commitment to assume legal liability for the authenticity of the above situation. Through information sharing, tax authorities shall verify the relevant tax-related information under the prescribed procedures and requirements. Tax authorities will raise no objection if the taxpayer is shown to fall under any of the following circumstances upon the inquiry system:

Starting from August 1, 2021, the export VAT rebate for steel products listed below is cancelled. HS codes include: