The Reserve Bank of India (RBI) has said that there was a 24% improvement in financial inclusion (FI) as measured by RBI’s FI-Index between March 2017 and March 2021.

MUMBAI: The Reserve Bank of India (RBI) has said that there was a 24% improvement in financial inclusion (FI) as measured by RBI’s FI-Index between March 2017 and March 2021. The FI-Index incorporates details of banking, investments, insurance, postal as well as the pension sector in consultation with government and respective sectoral regulators. In April this year, the RBI had announced that it would launch the FI-Index to capture the extent of financial inclusion. On Tuesday, the RBI announced the first numbers of the FI-Index, and will henceforth publish the data once a year in July. The highest weightage in the index (45%) is given to the usage of various financial services, followed by access (35%) and quality (20%). 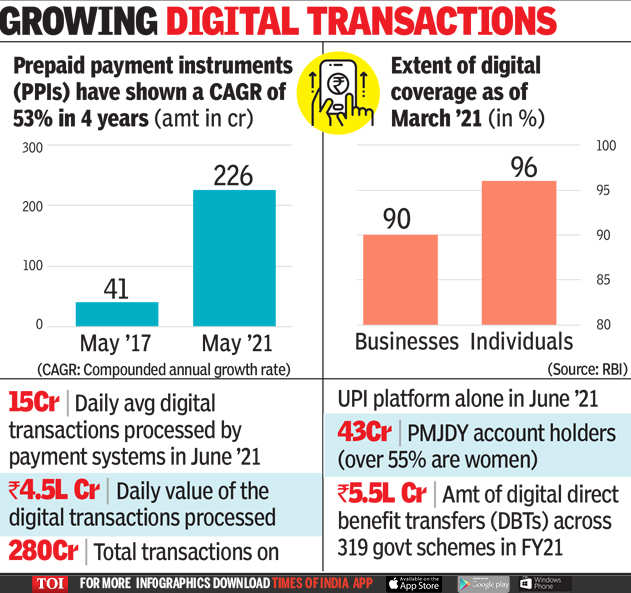 One of the biggest drivers of financial inclusion in the country has been the Pradhan Mantri Jan Dhan Yojana (PMJDY). There are about 42.6 crore PMJDY account holders with more than 55% being women. While the JDY was launched in 2014, the usage of the accounts picked up with the increase in direct benefit transfers (DBTs), which were facilitated by digital platforms and Aadhaar. The impact of the digital payment in DBT can be discerned from the fact that Rs 5.5 lakh crore was transferred digitally across 319 government schemes spread over 54 ministries during 2020-21. Since the pandemic, financial inclusion got a boost due to the increased usage of digital platform by small merchants and peer-to-peer payments. “Lessons from the past and experiences gained during the Covid pandemic clearly indicate that financial inclusion and inclusive growth reinforce financial stability,” RBI governor Shaktikanta Das had said, speaking at the financial inclusion summit. “As of March 2021, banks have achieved a digital coverage of 95.9% of individuals, while the achievement for businesses stood at 89.8%,” Das said in the summit.

The rise of the fintech’s have also supported financial inclusion as they innovated to simplify and promote digital payments like the UPI (Unified Payments Interface). According to a report by Macquarie, while the retail payments (by value) have grown at an 18% CAGR over FY15 to ’21, UPI has grown at a CAGR of around 400% over FY17-21 and now forms 10% of overall retail payments (excluding RTGS) from 2% seen couple of years ago. “Despite being a late entrant, UPI’s FY21 annual throughput value of around Rs lakh crore was almost 2.8x that of credit and debit card (at POS) combined largely,” the report said.

The development comes after major setbacks for the government in arbitration cases involving retrospective tax demands contested by Cairn Energy and Vodafone.

As per news reports, there are about 17 companies that are impacted by the indirect transfer of assets provision, including Vodafone, Cairn Energy and WNS. The government is yet to prescribe the rules around the withdrawal of indirect transfer of assets litigation, and the procedure of how companies can go about it. Several companies have already reached out to the government to understand the precise amendments and rules to settle the matter.

Foreign direct investments in India rise to $12.1 bln in May

"India has received the highest ever FDI inflow in 2020-21. It surged by 10 per cent to USD 81.72 billion and FDI during May 2021 is USD 12.1 billion, i.e. 203 per cent higher than May 2020," Piyush Goyal said while addressing a meeting of different industry associations on promoting exports. Foreign direct investments into the country is on the rise, jumping to USD 12.1 billion in May this year, Commerce and Industry Minister Piyush Goyal said on Monday. He also said the government is working on a mission mode to achieve exports target of USD 400 billion in 2021-22.

He said that exports are recording healthy growth and during August 1-14, the outbound shipments grew 71 per cent over 2020-21 and 23 per cent over 2019-20. According to the minister, India's average applied import tariff (duty) has dropped to 15 per cent in 2020 from 17.6 per cent in 2019, and the country's applied tariffs are way below the bound rate of 50.8 per cent (permissible limit under the World Trade Organization). Talking about employment, he said more than 54,000 startups were providing about 5.5 lakh jobs and over 20 lakh jobs will be created by 50,000 new startups in the next five years. "It is time for our industry to expand our capacity, capability and commitment to develop resilient global supply chains," he said, adding that the Centre expects that the Indian industry should suggest areas for intervention through research, handholding of exporters/ manufacturers, and deeper engagement with states and Missions. During the meeting, industry suggested steps like increasing export competitiveness, addressing logistic problems, active role of states in building capacity of exporters and developing international markets for Indian products. They also suggested inclusion of pharma and chemicals under Remission of Duties and Taxes on Exported Products (RoDTEP) scheme. Industry body PHDCCI's President Sanjay Aggarwal said these sectors are essential to achieve the target of USD 400 billion exports and "it is therefore requested to consider these sectors in RoDTEP scheme". "The government has budgeted only Rs 17,000 crore for a scheme that is supposed to reimburse embedded levies paid on inputs consumed in exports in FY'22. It is far less than the government's initial estimate of Rs 50,000 crore each year. The budget for the RoDTEP scheme, including all tariff lines, need to be increased," he said.

Hon. FM Nirmala Sitaraman presented the EASE 4.0 reforms along with felicitating PSB’s for their exceptional performance under EASE 3.0. Some of the banks that were felicitated are - State Bank of India, Bank of Baroda, and Union Bank of India. The EASE 3.0 was a success as the PSB’s reported healthy profits. These banks reported a profit of INR 31,817 crore in FY21 as compared to a loss of INR 26,016 crore in FY20.

Ease 4.0 is a reform for the Public Sector Banks to ensure smart banking. It was presented by the finance minister to be implemented by the IBA. The key issues touched upon in the EASE 4.0 reforms are co-lending with non-banking firms, digital, agriculture financing, and technological resilience for 24x7 banking. A huge focus has been given to data analytics, automation, and digitization.

Ease 4.0 is a continuation and further improvement of the Ease 3.0 initiative.

The key aspects under EASE 4.0 are highlighted as under-

The EASE Index will measure the performance of each PSB on 135+ objective metrics across five themes. It will provide all PSB’s a comparative evaluation showing where banks stand on the basis of the benchmarks and among their peers on the reforms agenda. The Index will follow a fully transparent scoring methodology, which will enable banks to identify precisely their strengths as well as areas for improvement. The index will be similar as what was adopted under EASE 3.0.

On 13 August 2021, the Swiss Federal Tax Administration published a clarification, announcing that the conditions for the activation of the most favoured nation (MFN) clause contained in the amending protocol, signed on 30 August 2010, to the India - Switzerland Income Tax Treaty (1994) have been met.

The MFN clause should apply as of 1 January 2021. If India does not apply the clause on a reciprocal basis, Switzerland will apply the reduced rate from 1 January 2023.

Currently, the treaty provides for a 10% withholding tax on dividends.

The MFN clause of article 11 of the 2010 protocol provides that this rate will be reduced when India afterwards signs a new treaty with another OECD Member States providing for a lower rate.